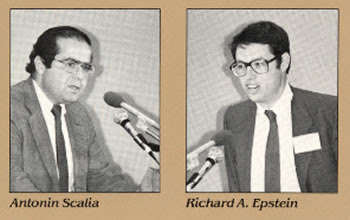 Richard Epstein’s new Liberty Forum Essay on the First Amendment is quite interesting and a little bit surprising.  Richard, who is one of the most well known libertarians, criticizes two of the Supreme Court’s most “libertarian” free speech cases — U.S. v. Stevens and Brown v. Entertainment Merchant Association.  Still, Richard makes some strong, principled points.  I have two main points to make — the first praising, the second criticising.

For his next move, Justice Scalia adopts the rigid proposition that the categories of speech that the government may regulate are in essence closed.  It is instructive to quote his exact words:

The most basic principle—that government lacks the power to restrict expression because of its message, ideas, subject matter, or content, a few limited exceptions for historically unprotected speech, such as obscenity, incitement, and fighting words. But a legislature cannot create new categories of unprotected speech simply by weighing the value of a particular category against its social costs and then punishing it if it fails the test.

This astonishing passage is a peculiar mix between high principle and historical accident.  On the former, Justice Scalia does not explain the generality of his principle.  For example, defamatory utterances seem to fall within the category of speech protected by content for it does not involve obscenity, incitement or fighting words.  Yet making this conduct tortious is perfectly consistent with the general libertarian principle that has never protected either force of fraud.  By the same token, the publication of a trade secret does not seem to fall within these three categories either, and it seems impossible to claim that the First Amendment requires this large field of law to bite the dust. His most basic principle is thus utterly undefended.

Nor are the confusions in this text removed by the appeal to history.  Each of the particular exceptions mentioned had to be endorsed or accepted by some court.  And what they did was to ask about making some kind of category-by-category cost/benefit analysis that he disparages.  Yet at no point does Justice Scalia indicate what principle allowed those cases to proceed once the categorical approach is rejected.

It is now commonly understood that all areas of constitutional law consist of an uneasy amalgam between explicit constitutional guarantees on the one hand and the implied limitations on those guarantees on the other.  The textual guarantees are extended to private property, contract, religion and speech.  The implied portion of the analysis is—or more accurately, was—captured in the standard formulation of the police power, under which each substantive guarantee was, and properly so, subject to regulation for the protection of “the health, safety, general welfare and morals” of the population at large, so long as the means chosen were reasonably adapted to the end in view.

But is Richard correct that the right way to analyze constitutional provisions is to assume that they incorporate a background police power?  I am skeptical for a couple of reasons.  First, it is not clear that the police power concept was in existence as a concept in 1789.  They certainly limited rights by these types of considerations, but it is not at all clear that they had a understanding of those considerations as a singular police power.   More work needs to be done on when this concept emerged, but my sense is that it emerged in the first half of the 19th century.  Thus, the police power may make good sense as a matter of political theory, but not of originalist constitutional law, at least for the initial Constitution and Bill of Rights enacted in 1789-1791.  (The 14th Amendment may or may not be another matter.)

Second, if one does not use a single police power concept, what would one use?  This is a tough question, but I believe the right answer is to look at background principles and understandings associated with a particular clause.  In determining the meaning of freedom of speech, for example, one must look to limitations that would have been deemed applicable to freedom of speech.  In figuring this out, one looks to case law and broader discussions of free speech provisions.  One may then have to generalize or make inferences from those specific limitations, but one must first look to the specifics.

Richard, I think, brings in the general theory earlier in the process.  Instead of looking at how specific rights were understood, he analyzes them with a more general police power approach.   That approach may result in a more coherent political theory, but also one that allows the interpreter more discretion.  Therefore, different interpreters may read in different theoretical limitations than Richard would — without Richard being able to point out what legal mistake they are making.  To me, the original meaning is better found in this clause specific approach.

Game’s Up
Laughing Near Lawyers

Why Culture Matters for the Economy

In a culture in which social trust is widespread, entrepreneurship and free exchange become more plausible and sustainable.

Nelson successfully shows how the liberal ideas of metaphysical and political freedom were part of a grand strategy to vindicate the justice of God.

Rereading Politica in the Post-Liberal Moment

by Glenn A. Moots

Althusius offers a rich constitutionalism that empowers persons to thrive alongside one another in deliberate communities.

In The American Democrat, James Fenimore Cooper defended democracy against both mob rule and majority tyranny.

A discussion with Christopher Caldwell

Christopher Caldwell discusses his new book, The Age of Entitlement.

A discussion with Yuval Levin